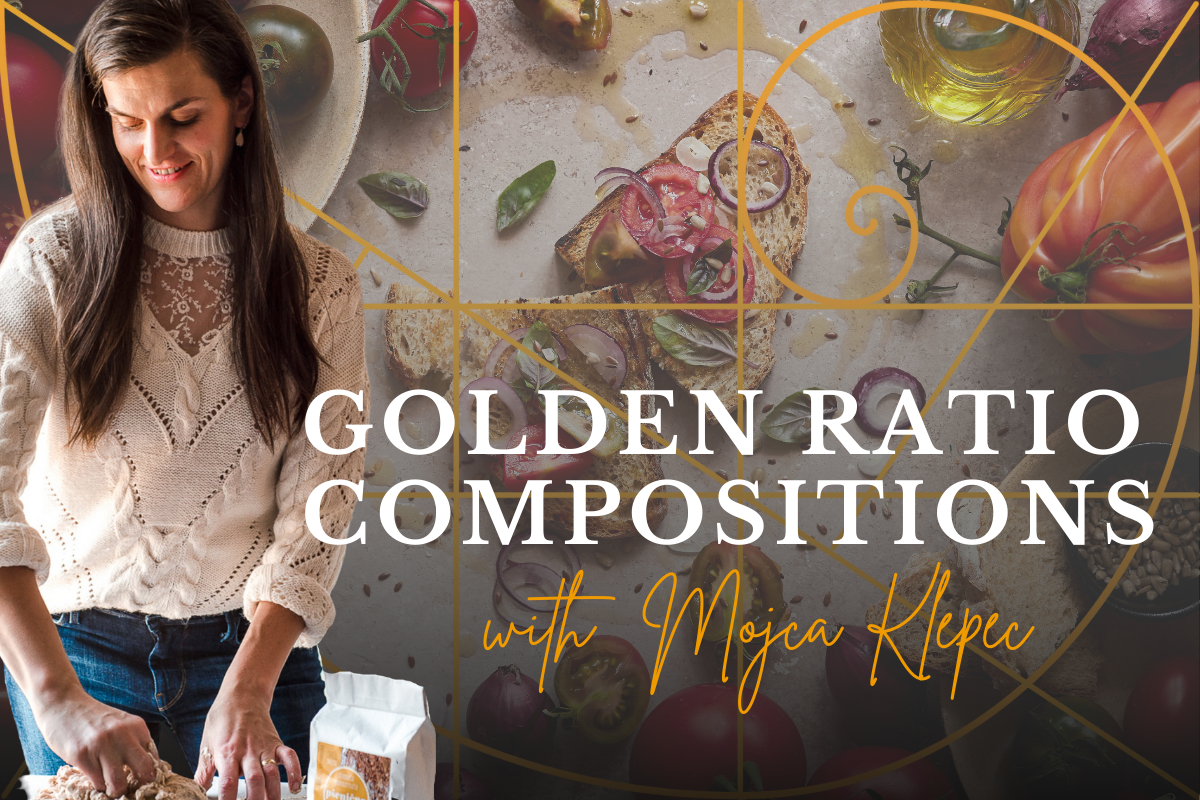 I just want to say a few words about compositional rules in food photography.

I remember when I first started I just couldn’t understand the importance of all those lines andintersecting points. I was so confused when I heard that main elements could be on the inter- secing points as well as inside the occuring triangles for example. What’s the point I was asking myself.

Slowly as I was shooting more and more I’ve found out that some compositional principles have become my second nature and I’ve used them in my photos without actually thinking about them. I would maybe enhance some chosen compositional rule when slightly cropping the final photo.

But things don’t always go as planned, especially in such creative jobs as ours are. And when

I felt stuck in the middle of the shooting process and nothing seemed to work for me I would return to the basics. I would try to follow one of the compositional principles and organize the elements in the frame to follow the grid. Golden Triangle is actually my most favourite com- positional rule, I use it very often in my work. It is my go to tool besides very intentional use of light, layering and using the rule of odds just to name a few.

I would suggest you to study Golden Ration Compositions and see with yourself how you feel about them. Try to put that into practice. You can also try to recreate some of my photos or some others that you like. As you practice more you will soon become the master of using it withour even noticing.

Happy creating and don’t forget to enjoy the process!

I wanted to create a busy table feeling like the one you prepare on a large family gathering. I had several pear & hazelnut cakes and wanted to put attention to their beautiful texture and pattern. The idea was to go with the minimal props to create that realistic feeling. I opted for MONOCHROMATIC colour scheme to really focus on the cakes.

What can happen with a scene like that is that it becomes too busy and our eyes wonder through the scene without clear guidence. Firstly I’ve decided on MY HERO cake. I choose white plate underneath to create COLOUR CONTRAST, while other larger cakes are sitting on a dark plates. There is also a dark blue napkin under the plate to create both CONTRAST IN COLOURS AND TEXTURES. (light textured background – dark plain napkin – white embossed plate – dark cake – light toppings in the form of sliced pear and hazelnuts).

My hero cake is placed off center to create visual interest. The middle of the hero cake is placed on theINTERSECTING POINT of the Golden Triangle. With this kind of placement the position is pleasing to an eye. What I did next was to use THE RULE OF ODDS, that is to use the odd number of similar ob- jects. I’ve added two white plates with cake slices. As the other part of the scene is mostly dark, those three elements create a TRIANGLE, leading the eye from one white plate to another. The placement of sliced pieces is really obvious here, it doesnt always need to be that strict. But it worked here. One sliced piece follows the reciprocal line and the end of the other slice touches another intersecting point.

I’ve placed spoons into different directions to create DYNAMIC MOVEMENT. I filled the frame with the rest of the cakes and created the REPETITION OF ROUND SHAPES. Together they are forming the C SHAPE around the main elements, helping to guide an eye to land on our hero subject.

As I was preparing a chocolate in my kitchen I’ve noticed how smooth and photogenic it is so I had like 15 minutes to capture the photo.

I enjoy shooting dark and moody so I’ve decided on darker bowl and unique plate underneath for some LAYERING. Dark blue BACKDROP was chosen as it goes great with the brownish colour of melted chocolate.

I instantly knew I have to be very intentional about the use of LIGHT. I’ve used side light and really fo- cus on those SPECULAR HIGHLIGHTS. The light here creates drama and interest. I also blocked some of the light on the back of the photo to make sure all the visual interest goes to the HERO SUBJECT.

As I was under time pressure I’ve decided on a good old GOLDEN SPIRAL. This composition techinque is quite obvious to use. It really helps guiding the eye through the scene all the way to the main hero. We have elements in the frame that are lighter in colour and visually heavy – I am talking about the co- coa butter on the upper left side. Normally our eye wanders to the area in the photo where there is the highest contrast. But with using all the desribed techiques and the fact that here the action is happen- ing our melting chocolate is the real hero of the story.

When I shoot photos for the clients I almost always use tethering and compose my scene to every little detail. Here it was just a quick shoot for Instagram. I’ve placed my camera on the tripod and connect- ed it to the phone app. I use wmu app for Nikon. It is not super great but it gets the job done. I love using an app because I can see what I am doing in real time.

Placing the end of spoon near the center of the spiral was very important to enhance the spiral. This was easier to achieve with using the app as it looks more natural and I didn’t need to do much crop- ping in the post processing.

Product photo for a client

The brief for this photo was to create a minimalistic scene with gin tonic as a HERO SUBJECT. They wanted me to use neutral props yet again that those props have character and add to the desired story.

So we had a bottle of gin that has a very interesting label and overall design and could easily overpow- er all the other elements. We also have three bottles of tonic with strong yellow – orange colour. Finally our hero is a plain drink with crystal clear ice and the only allowed decoration is a sliced lemon wedge on top. So our hero subject was actually the least interesting part of the scene at the beginning.

I’ve decided to relly on layering and PHI GRID as a very strong composition principle.
I had to put focus on the drink and lemon wedge is the most eye pleasing part of that drink. The glass was placed in the centre of the photo. To achieve this I’ve used two different wooden desk to add some VISUAL INTEREST and to put attention to this part of the photo because of LAYERING.
I’ve put the lemon on one of the guiding lines of the PHI GRID. All the place above that line serves as a NEGATIVE SPACE.

Old pocket watch was intentionally placed on one of the intersecting points of the phi grid. It also helps telling the story and is the prop with the most character. As I was placing it very close to the main subject it helps draw attention to our hero and not away from it.

This particular placements of main subjects also creates some sort of triangle connecting the green mint, yellow lemon wedge and yellow – orange labels on the right. It makes us explore the scene and travel through the photo to examine the details.

Phi Grid served as a starting point and a very helpful tool to create powerful composition.